10 Most Popular and Highly Paid Programming Languages to Learn

The leader may not have changed, but the salary certainly has.

Our list includes 10 different programming languages and the counting starts from the 10th place.

We must also mention that each of these languages is unique in its own way and in order to increase your chances in the IT market it is worth learning a few of them or at least having some idea about them. Therefore, read the text and choose the language that suits you best. In addition, for each description we have added a chart that shows the estimated salary for a particular programming language, this will certainly help you to make the right decision.

C# programming language is an object-oriented programming tool created between 1998-2001 by a group of Microsoft engineers.

This language is extremely useful, multifunctional and commonly used. C# will be a perfect choice for you If you are interested to gain experience in creating native applications under MS. However, the most important thing is that the skills in C# language will enable you to create efficient applications both for desktop applications as well as for mobile devices, which are used daily by millions of users around the globe.

Ruby was created in 1995 thanks to Yukihiro Matsumoto but only since 2003, it has gained more popularity. 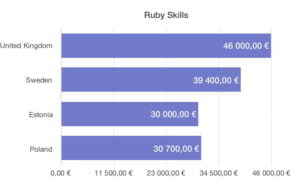 C++ is a general-purpose programming language that was created in 1983 by Bjarne Stroustrup.

The core area of usage of the C++ programming language are applications and operating systems that is why this language is so popular as well as so reliable. For many, it is one of the best tools for creating applications that process films and music. It is also worth mentioning that the Google Chrome, Amazon website and Microsoft Windows are all written in C++. That’s why it’s worth knowing this language.

Node.js was created in 2009 thanks to Rayan Dahl and the company Joyent.

A programming language called Node.js is a multi-platform open-source runtime environment for creating server-side applications written in JavaScript language. An important advantage is a fact that many large corporations use Node.js, and they include the giants such as IBM, LinkedIn, Netflix or Yahoo! Therefore, if you are interested in working in these corporations it is worth to consider learning Node.js.

The programming language called React was created in 2013 by Jordan Walke. 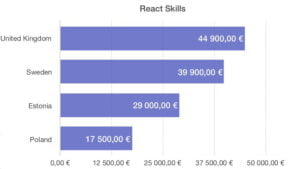 This programming language is used to create graphical interfaces for web applications. In a sense, it is the JavaScript software library. It is equipped with DOM or Document Object Mode and JSX language. React is used in the websites of companies such as PayPal, Archive.org and Walmart. It is also frequently used in projects on the GitHub.

PHP was founded in 1995 by Rasmus Lerdorf. 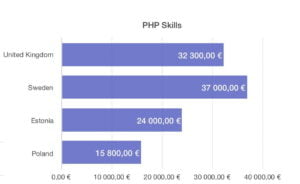 This programming language was developed mainly to generate websites and build web applications. It is an open source scripting language. The language of PHP is easy to learn and allows you to create professional as well as dynamic websites. PHP is a classic of web technologies, so every programmer should know its basics.

Python first appeared in 1990 and its creator is Guido van Rossum. 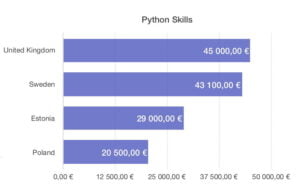 This programming language is remarkable because its popularity grows year by year and its applications have no limits.

Python is one of the most powerful programming languages used for tasks such as mathematical calculations, web development, data analysis, automation tasks, etc. and is extremely user-friendly and simple to code. Python has been used in creating applications for companies such as Google, YouTube and NASA. This language very often appears in the recruitment requirements so it is worth to consider learning it.

Now is a time for the top three of our list! So get ready for the most popular as well as the most profitable programming languages.

The first edition of .Net dates back to 2002 and its creators are Microsoft engineers. 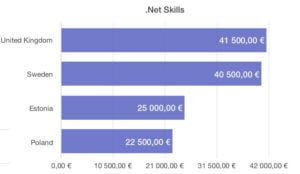 Net is a software platform in the sense of a virtual machine.

The .Net technology includes Common Language Runtime and libraries providing standard functionality for applications. It is worth noting that .Net sets new standards of programming and it is a very interesting tool for IT professionals.

JavaScript was created in 1995 by Brendan Eich.

It is a scripting programming language which is most often used for creating websites. As for the frequency of its use, over half of all programmers use JavaScript. This language is an essential tool for the development of front-end and back-end. JavaScript is used in almost every website and if you are interested in creating corporate websites you should learn how to use it.

If you are at least slightly interested in the IT industry there is no way you could never hear about the Java programming language. Everyone knows what Java is.

This language was created in 1995 and its creator is James Gosling. 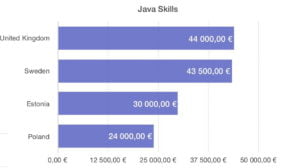 Java is used in the whole spectrum of applications from card and device applications to standard applications for advanced server systems. Thanks to the powerful Java Virtual Machine, this language is compatible with many platforms. Java’s popularity has grown even more when was chosen as the language for writing applications for Android. If you want to ask yourself which of the biggest corporations in the world uses Java, you better think about which one does not! Java is everywhere from Google through Facebook to Youtube. Therefore, the Java Developer is currently the most wanted speciality on the IT labour market and thus also the most profitable one.

All of the provided informations are an estimate of the amount based on the data from PayScale.com and serves as an orientation valuation. It is worth remembering that the IT market is very dynamic and it is constantly changing. For those who are just beginning their journey with the IT industry, it is recommended to start with the most popular programming language such as Java and successively you can add other languages which knowledge will make it easier for you to find your dream job.