Why Learning Python is a Great Idea?

When we ask ourselves what Python is, it immediately comes to our minds that it is a versatile, general-purpose and popular programming language that will work perfectly as a first language. Python is extremely concise and easy to read and is also a very useful language to have in the stack of any programmer because it can be used for almost anything from creating websites to developing software and scientific applications.

It all started in the late 1980s when Guido Van Rossum worked on the Amoeba operating system distribution group. He wanted to create a language that would be expandable and so in 1991, he released Python. This programming language owes its name to the British series “Monty Python’s Flying Circus”.

Why so many developers love Python?

If you’re wondering why so many developers love Python, take a look at the picture below and ask yourself a question: how can you not love it?

Programming in Python is simply easy, enjoyable and fun. Its syntax is extremely intuitive and resembles the English language, making it a very natural programming language. Python allows you to write more functional programs with only a few lines of code. You will be astonished how much you can achieve with Python when you master the basics.

Moreover, Python has a huge community. If you have a programming problem in Python, it’s probably already been asked and solved by someone in this large community.

Many active online forums can be useful if you get stuck in a deadlock, you can easily find them on platforms such as Stack Overflow, Subreddit or Google. Python is changing all the time and becoming more sophisticated, faster, and able to respond to the challenges of the modern world. Maybe that is why everyone loves to use it!

Why learning Python help you to develop your career?

There’s no denying that Python is developing really fast and dynamically, and if you’re just starting your programming career, it makes a lot of sense to learn this programming language because it can help you to grow bigger. Not only will it help you get a job quickly, but it will also speed up your career.

We have already mentioned that Python is intuitive, close to real English language, simple to use and easy to learn. It also has useful built-in libraries and works as open-source, which makes it possible for practically anyone to use it. This makes it much easier to learn as well as to get programming jobs. You can start acquiring skills with the GitHub platform and meet people to take part in bigger projects.

This programming language is also remarkable in that it has a large number of third party open-source libraries. It really makes things easier to work with.

If you are still wondering how knowledge of Python can help you develop your career, hereinafter we present you with the global corporations that use this programming language. It really should give you food for thought.

So the companies that use Python are:

Why Python is a future of AI and Machine Learning?

It is worth mentioning that Python is currently driving scientific programming. In the past, scientists have used MATLAB for research, but now they are switching to SciPy or NumPy, which are based on the programming language which is Python. These modern programs allow you to perform complex calculations with a few simple steps, which makes the work much easier and faster, at the same time, positively influencing the development of technology.

The fact is that Python is the future of Artificial Intelligence. With the flexibility of the language, its speed and the Machine Learning functions provided by libraries such as Keras and TensorFlow, we will continue to see Python dominate the Machine Learning environment.

So, if you’re interested in Machine Learning, want to work with big corporations, interesting startups or just want to have fun, Python is the only major programming language that makes it easy.

Why learning Python will pay off?

There is no denying that Python programmers are among the highest-paid programmers, especially in the areas of Data Science and Network Development. Their position is growing all the time and depending on their experience, location and domain.    You can see how it looks like on the below presented diagram taken from the survey conducted by daxx.com in 2019. 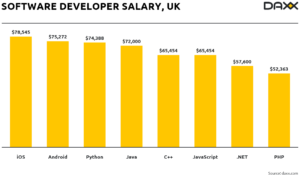 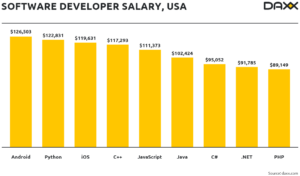 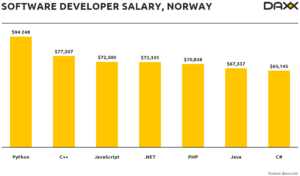 However, these figures are growing all the time because Python is ideal as also a great tool for Artificial Intelligence and Machine Learning, which makes a very good prospect for the future.

Nowadays each one of us should at least know the basics of programming, because it will surely be useful for us in the future, whether in our professional career development or our private life, so it is worth to know the programming language that fulfils our expectations. Python is exactly what you need. A language that has a lot to offer and is also very clear and easy to learn. That is why you should learn Python and you will certainly find it extremely useful and enjoyable. Learn Python with SDA – read more about our courses for beginners.