Elon Musk, a man who sends cryptocurrency prices to the Moon and back faster than his SpaceX, sends rockets to Space. But, over the last years, he constantly seems to put the arm on the cryptocurrency market. Literally!

Diamond Hands is slang for someone who tends to hold position and shares despite setbacks in a stock or crypto’s price in the financial market. This tweet is a sign that despite the last events, Tesla plans to hold its bitcoin shares. Probably?

There was a lot of news on this topic recently. To that extent, where is hard to follow the exact chronology. In a brief overview :

📈 The company announces its plans to accept Bitcoin as a payment for its cars ➡️ the crypto price skyrockets in hours.

📉 In addition, China took a step to crack down on digital coins ➡️ , and the whole cryptocurrency market keeps shrinking.

📉 Elon Musk jokes about Dogecoin at “Saturday Night Live” ➡️ and investors selling off the currency.

📉 Musk tweets that SpaceX will accept Dogecoin as payment for Moon travels ➡️ , but prices are still falling.

📈 Musk Tweets: “How much is that Doge in the window?” ➡️ price of the currency spiking up. 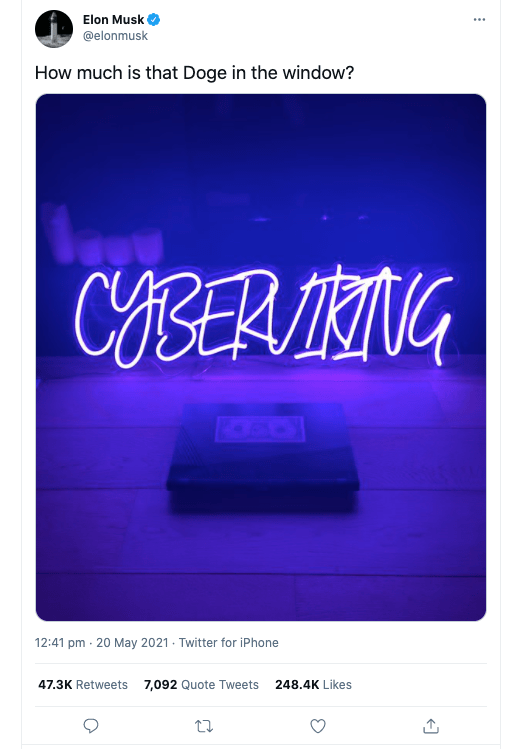 Intentionally, we will not go deeper into the numbers of Dogecoin, Bitcoin, or any other “coin,” for that matter. There is a high probability that Mr. Musk will tweet something, and prices will go on another roller coaster by the time you will read this article.

It’s not the first time and probably not the last when Elon Musk sent crypto markets on a wild ride. However, experts agree he is playing irresponsible and shady games.

Get your popcorn! The show will go on!

Dogecoin joke cryptocurrency, is it?

So what is a Dogecoin? In far 2013, “Doge” was a popular meme all over the internet back then. Based on this meme, two software engineers created a Dogecoin as a parody cryptocurrency.

It is written in C++ programming language, the same as Bitcoin.

Python contains about 15,1% of the Doge code.

Over the years, the community around currency has quickly grown and keeps growing, despite all recent news and manipulations. A joke at first, or not – it doesn’t matter.

Today, it’s the fifth-largest cryptocurrency in the world. Its market value – $70 billion.

There is one lesson we can all learn from Dogecoin

Whether you are a beginner or a pro, in programming or any other field, creating something serious, or for a joke… Whatever you are doing – DO IT GOOD! You never know what will happen next with your idea. Or when someone like Elon Musk will start tweeting about your project.